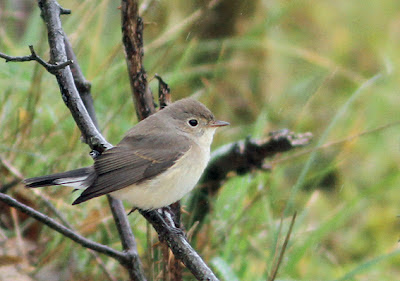 
My plan today was to tick the Booted Warbler and then go and see the Red-breasted Flycatcher at Warham. But I never reached Warham!

Parked the car on the main road at Burnham Overy and started walking down the track to the Booted Warbler. Within a couple of minutes, birds were scattering from the hedges including willow warblers, robins and a posing redstart on the metal farm gate!!! Several song thrushes were flying overhead. This was the beginning of an awesome afternoon! 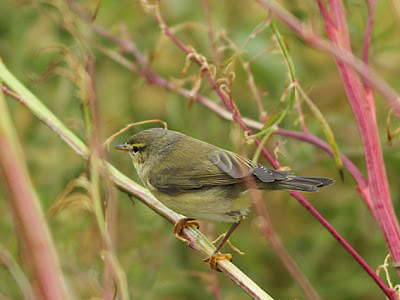 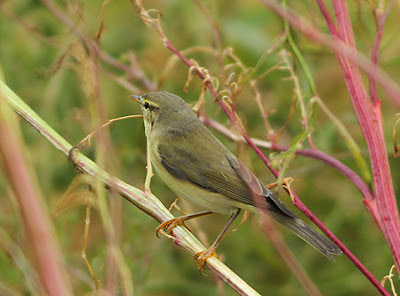 
I reached the Booted Warbler and saw the bird fairly quickly. At one point it flew just a few yards past me and landed on a dead dock stem. I was just about to take a photograph, when an annoying man ran past me with his camera, he was that desperate to get a picture and instantly flushed the bird. No fieldcraft and no consideration for fellow birders – I was not amused to say the least. He didn't even achieve anything, as he didn't even get a picture, upset the bird and me!!! It was now raining heavily. Lee Evans was here and he wandered off up ahead. I really wish I had joined him now as he found several good birds after I saw him including a Little Bunting by the brick building at the far end of Gun Hill. There was also a Barred Warbler, Wood Warbler, Ring Ouzel, tons of redstarts and wheatears, song thrushes, pied flycatcher, robins, lesser whitethroats, willow warblers and chiffchaffs.

Update: 30-9 - a lady called Joan very kindly emailed me to say that Lee didn't find the RBF (as I thought that day), so have amended my paragraph above accordingly. 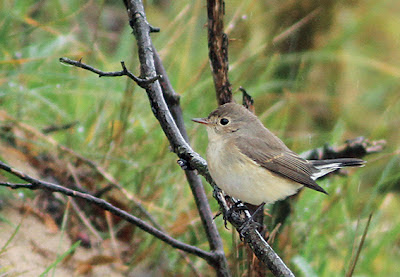 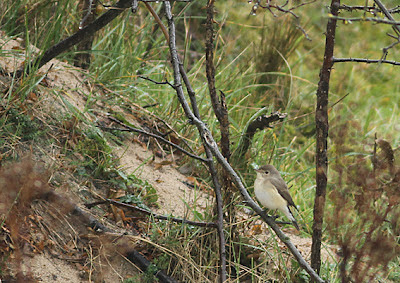 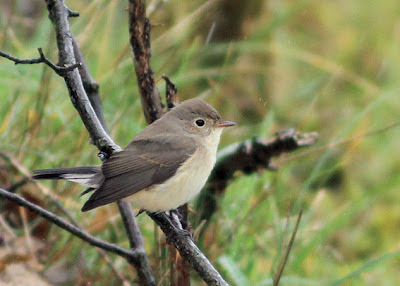 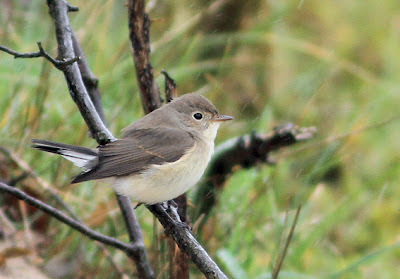 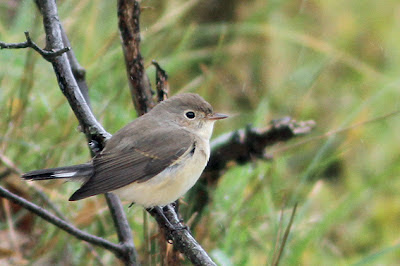 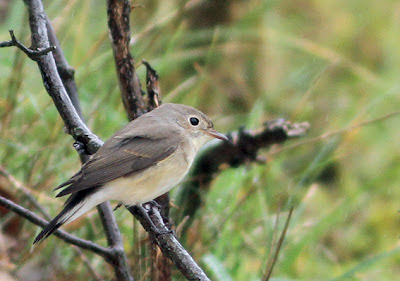 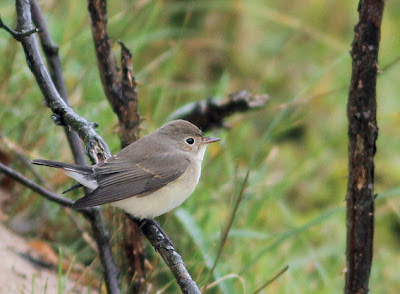 I walked to the end of the track and took photographs of the Red-breasted Flycatcher which I had all to myself when the only three people watching it, legged it for the Little Bunting! I too then went off down to Gun Hill, but the Little Bunting had not been seen again. I suspect as birds do at Gun Hill, it had carried on over Scolt Head. I didn't see the Wood Warbler or the Ring Ouzel, but I did have a brief view of a Barred Warbler that bombed out of a bush and then back in again! Even though it was raining I took my coat hood down as this restricted my viewing and I didn't want to miss anything. There were redstarts and wheatears everywhere, I didn't know which way to look first! The rain continued and then got heavier and heavier. My waterproof coat and walking trainers are NOT waterproof I quickly discovered and I could feel my feet squelching as I walked. The same with my two waterproof bags that allow me to carry my camera at my side in readiness to take a picture when its raining. My camera got the wettest its ever been. I stayed by the bushes on the seaward side of Gun Hill for quite a while, as this seems to hold the most birds. There were at least 4 redstarts in this bit alone along with willow warblers and chiffchaffs and a goldcrest. It got so cold and windy I sat down under a bramble bush to get a bit of protection from the atrocious conditions. My dripping wet hair was making me very chilly and my hands were painfully cold. I watched hirundines hurtling overhead including house martins and swallows. Several birds dropped into the bushes just in front of me. I risked getting the camera out of the wet bags to take a picture of a redstart sheltering under a bramble in a beautiful pose and couldn't work out why the picture was so blurred, until I looked at the lens to discover it had fogged over! I put the camera away for the last time. As I walked back I saw very little, obviously the huge fall of birds had either moved on or were hunkered down in the rain. I was seriously cold and wet now. It had been worth getting wet for – I have not seen a fall of birds like that for many years – a very exciting afternoon.

Got back to the car and poured a nice hot cup of coffee. Turned camera on to look at pictures and it wouldn't turn on. I was horrified. My camera had obviously got too wet. The lens was also steamed up. I felt quite sick. This had now spoilt my spectacular afternoon. I took the battery and card out of the camera and left all compartments open and sat the camera on the seat next to me with the heating on full blast to attempt to dry the camera out as I drove home.

Took me ages to sort all my wet gear out (again) and have sat the camera and lens next to the radiator. I was going out at first light. I can't go anywhere without my camera, really I can't. I WILL find a mega if I don't have the camera, that's for sure! I do have a Canon 40D for back-up but still no good with the lens fogged up. I don't have another 300mm/+ lens spare!!!

I was going to add pictures tonight, but too tired now, so will add them tomorrow.

Too tired to add other bird news, but the hottest news came from East Hills (typical) see Dave's excellent haul HERE.  Congratulations! Generally there were redstarts, pied flys, ybw, ring ouzels along the coast and barred warblers. Wryneck at Snettisham. The RbFlys at Holme and Warham remain. 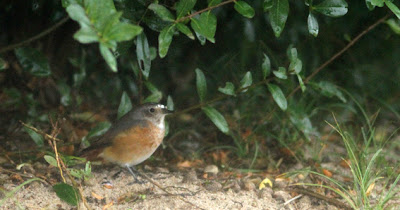 Common Redstart
an interesting bird, sheltering under a bush at Gun Hill.
Rubbish picture taken with fogged lens!
Note to self: don't let camera or lens get wet EVER again!
Posted by Penny Clarke at 14:38