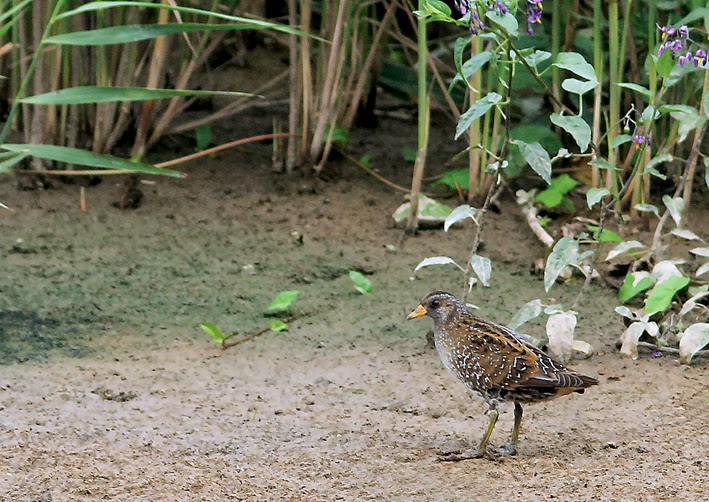 AN EVENTFUL EVENING!!!
I was too exhausted last night to go and see the Spotted Crake at Titchwell RSPB and I just hoped that it would show again today! Luckily it did, although elusive, having only been seen twice during the afternoon. After work, I went home to collect my birding gear and then made my way to Titchwell via the Choseley roads.

As I was driving along I remembered a time recently when I was driving a little too fast along this narrow road, so I made sure I was driving at a sensible speed to allow time for another vehicle to pass if one should suddenly appear – as I was thinking about this a huge black 4x4 headed towards me, literally! They were driving much too fast and as I slowed down, they didn't reduce their speed at all and I realised that if I didn't mount the verge, we would have crashed, so they left me no choice but to veer onto the verge. The 4x4 also then moved across onto the verge (although only a small amount compared to me) and continued on at break neck speed. I was really unlucky – there must have been a lump of concrete or something similar, as the noise of my car hitting something along the verge sounded frighteningly loud! As I came to almost a standstill, I looked in my rear view window to see that the 4x4 had continued on and not even stopped! I don't know why, but I just didn't want to get out to see the state of my car – my instinct told me that I had done some serious damage to the bodywork and I decided to carry on to Titchwell before I dared to look.

In the carpark at Titchwell I was shocked to see that there was no visible damage to the car at all. I couldn't quite believe it, but when I looked underneath the car I found a hole and dripping liquid – my heart sank – felt and smelt the liquid, but couldn't smell anything, so at least it wasn't fuel. This spoilt the evening and I couldn't decide what to do. I decided to carry on birding. Nothing was going to change what happened.

Things deteriorated further when several birders told me not to bother hurrying, as the Spotted Crake had not been seen for hours! What next?!!! So, I strolled along the path towards Island Hide to join other birders and hope! Juv. Yellow Wagtail directly in front of me in the small bay just to the right of Island Hide, which is were the Spotted Crake was last seen. Shortly after my arrival, Lee Evans turned up with tan and white shorts! Unbelievably Lee had also encountered the black 4x4 on the Choseley Road, minutes after my incident! He said they had almost run him off the road too and that they were driving much too fast – two men apparently were in the driver's and passenger seat. Frustratingly neither Lee or I managed to get the reg number.

Back to birds! There was a fantastic selection of birds at Titchwell. The reserve is holding huge numbers of waders currently and is looking really good! Lee pointed out a juv. Turtle Dove that flew across from the west and flew east across the main path! There were 7 Arctic Skuas distantly over Thornham Point, but no sign of the Long-tailed Skua. Other birds seen were: Greenshank, Green Sandpiper, Wood Sandpiper, several Spotted Redshanks, tons of Avocets, Little Egrets, 1 Heron, 17 Spoonbills (by late evening), several Yellow Wagtails flitting about, a Barn Owl, 5 Marsh Harriers, 2 Kestrels, Water Rail, tons of gulls, Redshanks, Common Terns, Grey lag Geese etc. The light was perfect, but the prize bird was in hiding! Several people gave up and left including Lee.


There was only about 4 or 5 of us left in the end. Suddenly someone said 'there it is' and there it was indeed, emerging out of the edge of the reeds and put on a fabulous display for us at 8.16pm. Phoned Lee to let him know.... he said a few choice words and then hung up – he had obviously started to run, as a few minutes later we could see him sprinting up the path towards us and he 'ticked' the bird in my scope. You can hear Lee talking about me calling him in the video (above) and me laughing about his ice-cream that he had been in the middle of! Phoned RBA to update the recent 'no news' message. The Spotted Crake was being seriously harrassed and bullied by two Moorhens who teamed up together to chase the crake at any opportunity, but they did eventually give up which allowed the crake to relax a bit. After reeling off some photos I set up my phone-scoping kit and took some video through my Nikon ED50 scope with 13-40 zoom eyepiece. The video is not very good I'm afraid, as you can't get rid of the vignetting with this eyepiece, but you can see what the bird is! The sunset was stunning and it was a beautiful end to the day. Sadly though, very much tarnished by my car incident!

Lee left before me and very kindly checked my car out me to make sure it was road worthy and phoned me to say it was ok to drive, which re-assured me, thanks. Steve from Long Stratton also kindly had a look at the car for me when I got back to the carpark. Drove home slowly! Garage in the morning to check out the damage!

MORE PICTURES TO BE ADDED
Posted by Penny Clarke at 23:45