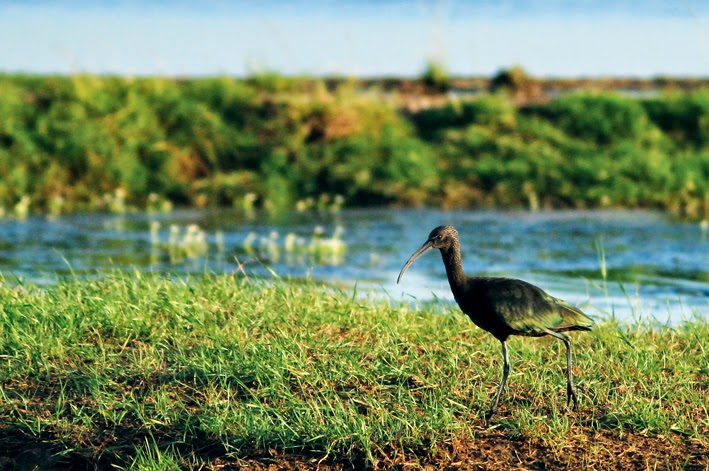 I have not been to Frampton Marsh Reserve for several years, which is dreadful really, especially when its only half a mile more than going to Cley Reserves (34.5 miles). I'm always drawn by the coast and I find it difficult to leave Norfolk! With a Lesser Yellowlegs and a Glossy Ibis on offer and with a good selection of waders to add, I decided to re-visit this reserve.

The medication I am still taking for my back, completely wipes you out and I didn't get up until late in the morning. After lunch I made my way to Frampton. There was a torrrential storm on route which made for interesting driving! On my arrival in the carpark, I didn't recognise anything. I can't remember the visitor centre being there at all, but I suppose it must have been. I asked advice in the centre on where to find the Lesser Yellowlegs and headed along the path/road towards the sea bank and pools. There were a few birders here and it took a while to see, but eventually I had a distant view through my scope! I can see why there's hardly any pictures of this bird, well I haven't found any decent ones on the net yet, but a birder I met later said he put some on the Lincs Bird Club Website. Oh and just found one here. The Glossy Ibis was very obliging and was feeding in shallow, muddy pools near the roadside, but the light was the wrong direction for photos sadly.

I decided to walk round to the East Hide, which looked very distant, but thought I may have a chance of having a closer view of the Lesser Yellowlegs from here if I was lucky! The walk round was beautiful, this reserve has really developed into an amazing place. There is a fantastic mix of flowers and plants, which in turn attracts lots bees and insects. In fact bees were abundant here, spending lots of time on the carpets of clover. The East Scrape (think its called) which is your left when walking up to the hide entrance was full of birds: including several Common Terns, Avocets, Teal, Ringed and Little Ringed Plovers (with cute fluffy chicks) and Little Egrets were dotted around. The East Hide itself is a brilliant design – with viewing flaps all the way round and the wooden bench seats were the right height – well they were for me anyway! In the very far distance I thought I could see the Lesser Yellow-legs, but it was hazy and I couldn't be sure at all – took some phonescoped video, but this still doesn't clarify the ID! Sheep grazing all round the reserve and a cute lamb was skipping close to the hide. Large numbers of Black-tailed and Bar-tailed Godwits here also. I couldn't decide whether to walk back via the sea bank or return the same way. With skittish cattle on the sea bank, I decided to return the same way! Before I walked back, I climbed the steps up to the sea bank and scanned the marshes for a while and could see a Marsh Harrier distantly – the views of the wash from here are vast. Other birds seen were: Reed Buntings, Skylarks, Black-headed Gulls, Great Black-backed Gulls, Redshanks, Snipe, Spotted Redshank, several Ruff, a Brent Goose, Lapwings, Marsh Harriers, Heron, Sandwich Terns, Dunlins, massive Starling flocks, Mute Swans, Great Crested Grebes, Sedge and Reed Warblers singing and seen, Swallows and Swifts.

I had a lovely surprise when I returned to the carpark. I was sitting in my deckchair eating my tea (sandwiches) when suddenly a Turtle Dove flew across the carpark, landed in a tree and started 'purring'! How wonderful! I couldn't get a picture, as the sun was the wrong side (again). I walked along the public footpath between the hawthorn hedges to find more Turtle Doves (as recommended), but only found a blackbird and chaffinches here. At the end of the path I sat on the bench seat for a short while, which overlooks the marshes and watched Little Egrets and Lapwings in a muddy pool. Two greenfinches landed in a large, dead elder tree. I walked back to the carpark and then spent some time looking in the visitor centre nature garden, which I was very impressed with. Lots of butterfly attracting plants and flowers planted in wooden, framed areas. Willow coppicing tunnel and large dome (presumably for children to play in). I also found a magnify glass to view items incorporated into the top of a post which was a brilliant idea. Several picnic tables here also – a very pretty and well designed setting. All the plants reminded me of the nature garden that father had at HBO in which he planted plants to attract butterflies/insects in big blue tubs to show visitors. 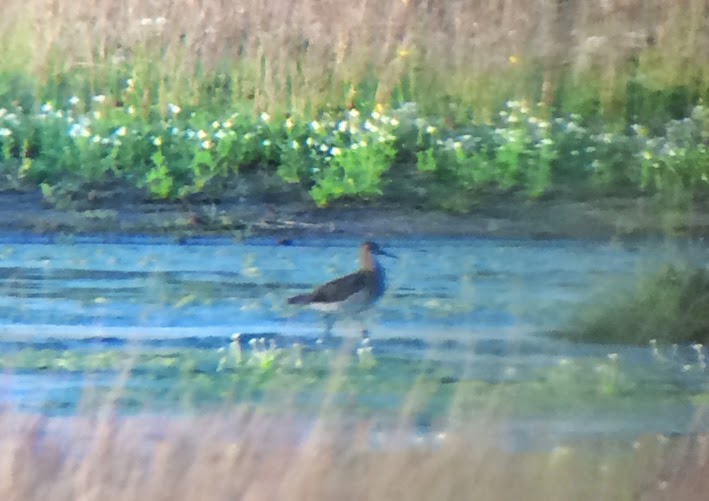 LESSER YELLOWLEGS
Distantly at Frampton Marsh RSPB
Rubbish picture, but best I could do!


I spent the rest of the evening trying to see the Lesser Yellowlegs again by the shallow pools by the sea bank – I did see it again, briefly. Hundreds of Black-tailed Godwits and some Bar-tailed here in the roost! Got some better pictures of the Glossy Ibis this evening. Left here far too late.

I was horrified when I reached the Boston roundabout to return the same way, when it said 'ROAD CLOSED.... follow diversions'. I could see the road being re-tarmacked. The diversion took me all the way to Spalding, I was not a happy bunny and got home later than expected. I did see a Little Owl on my diversion though – on a back road somewhere near Holbeach.

Aside from the big detour home, I had a fabulous afternoon on a first class reserve.

PICTURES AND VIDEOS TO BE ADDED
Posted by Penny Clarke at 23:59